My wife and I both work from home, so we can theoretically work from anyplace with Internet access. With this in mind, we've dreamt of a future where were can pick up and go to a different state (or country!), rent an apartment, and divide our time between working and exploring our new surroundings.

Last year we took the first of these extended trips. The first trip was a five-week visit to Portland, Oregon and the second trip was a month-long journey through Europe. I absolutely loved both of those trips, but they were terrible for my trumpet playing. During the first trip I barely practiced and I didn't practice at all during my month in Europe. I would have hoped to rebuild my chops in a couple of weeks after those trips, but it ended up taking several months of frustrating practice sessions before I was back to my pre-trip level of playing.

Wishing to avoid another lengthy period of chop rebuilding, I promised myself that I'd maintain my daily practice routine on all future trips. After all, I'm already bad enough on the trumpet -- I can't afford to get any worse!

After visiting Europe for the first time last year, both my wife and I couldn't wait to return. We weren't quite sure where we wanted to go, but we ended up picking Amsterdam for its beautiful canals, architecture, arts, and bicycle-friendly culture. We rented a lovely apartment near Prinsengracht and Reguliersgracht, bought a couple of used bikes, and quickly found ourselves falling in love with the city. I have so many wonderful memories from our month in Amsterdam, but one of my favorites was from a bike ride towards Bimhuis, the main jazz venue. As we approached Bimhuis, we saw dozens of people enjoying the afternoon sun, drinking beers, and sitting on the waterfront at Hannekes Boom, an indoor/outdoor bar. We stopped for a few drinks ourselves, and happily lost an hour or two as we dangled our feet over the lapping waves and watched the boats go to and fro.

I know, I know. You're all thinking, "Enough about Amsterdam. Let's get back to trumpet talk!" Ok, you win.

A couple of years ago, I bought a Colin Pocket Max pocket trumpet so I could easily put it in my luggage and bring it with me when I travel. Expectations fell short of reality, though, and it hasn't gotten much use, neither at home nor in my travels. I decided to change all of that in Amsterdam, so I made a small wooden case for my pocket trumpet and I packed it into my check-in bag.

Some of you might think it's foolish to put a trumpet in checked baggage. Honestly, I don't think it's a good idea either. I know airlines allow passengers to bring an instrument as an additional carry-on, but I didn't want to juggle three bags while navigating the train stations and trams upon our arrival to Amsterdam. I also didn't want to put the trumpet in my carry-on (a backpack) because it was already full of clothes and other essentials that I'd absolutely need if the airline lost my checked bag. Even though it was a bit risky to put the horn into my checked bag, I was fairly confident that my wooden case would protect it. Thankfully it made it to Amsterdam and back unscathed. 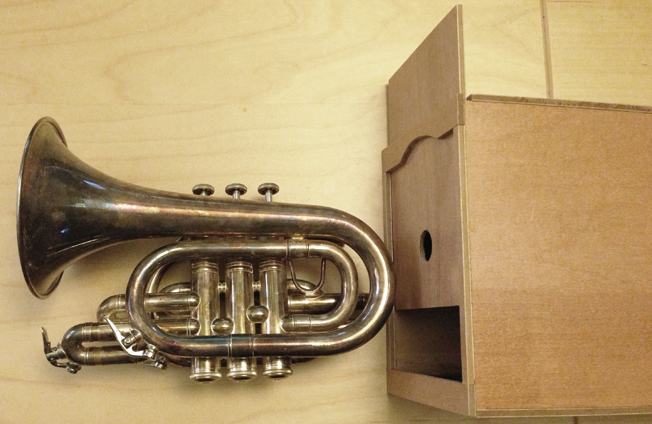 Pocket trumpets tend to be an interesting topic among trumpeters, so I thought I'd share my impressions of the horn. As mentioned, it's a Colin Pocket Max. I bought the horn on eBay for about $400. At that time, I had only played one pocket trumpet, a used Carol Brass pocket trumpet that I tried at one of the Atlanta Trumpet Festivals. I didn't care for the tone and intonation of the Carol Brass horn and I felt it was too expensive for a horn that I didn't love -- I think it was about $700. Shortly thereafter, I saw the silver-plated (and now nicely tarnished) Pocket Max on eBay for $400 and figured it was worth the risk, especially since I had read some good reviews for the horn. As I'd learn, the Pocket Max is a decent sounding horn, but it definitely has intonation problems once the notes get below the staff. It might have intonation issues above the staff too, but I don't spend a lot of time up there! Due to the intonation issues, I probably wouldn't want to play the Pocket Max in public, but it served me well enough during my month in Amsterdam.

As I mentioned earlier, we were staying in an apartment building in Amsterdam. Playing the trumpet quietly was foremost in my mind because the apartment walls were thin, and I didn't want to annoy our neighbors who lived there year-round. I brought a Harmon mute to help lower my volume, but even with the mute I still felt that I was too loud. At that point my only option was to try to play more quietly. Note: I own a sshhmute and a Best Brass practice mute, but I don't like either of them. They cause intonation problems, making it difficult to practice ear training.

Over the years, I've heard several people discuss the benefits of practicing the trumpet at low volumes. For example, playing softly was recommended in one of the master classes that I attended at the 2012 International Trumpet Guild conference. And Cat Anderson, Duke Ellington's legendary lead trumpeter, was such a firm believer in playing softly that he recommended playing a single note at a whisper tone for 20 minutes as part of a daily practice routine.

According to the experts, playing softly is supposed to relieve tension and mouthpiece pressure while simultaneously strengthening the embouchure so it's more focused and responsive. For me, reduced mouthpiece pressure is perhaps the most important benefit of playing softly. Most trumpet players at one time or another have used excessive mouthpiece pressure to force out a high note -- or in my case, a "D" in the staff! The extra mouthpiece pressure stretches our lips making it easier to buzz faster, thus increasing our range. And it works wonderfully. That is, until all that pressure cuts off the blood supply to our lips and our embouchure storms out of the room yelling, "I can't do this anymore!" That's basically what happened to my chops back when I had my chop blowout.

I had tried practicing softly in the past, but it wasn't until Amsterdam that I was forced to do it every day for an extended period of time. At first, I could barely get my lips to buzz while playing quietly. Over time, though, I was able to complete more and more of my practice routine while playing at a very low volume. By the end of the four weeks, I could play my entire routine almost as well as I can play it at normal volume levels. My range also seemed to improve, as I was more consistently able to play two-octave scales beyond high "C".

After my Amsterdam trip, I decided to continue practicing softly on a regular basis. I don't use a mute at home, but I do try to match that muted volume while working through my practice routine. I also purchased one of those adjustable Denis Wick cup mutes, which I used to successfully play quietly during a recent six-week visit to Portland, Oregon. The cup mute doesn't distort my sound as much as the Harmon mute, and because it's adjustable, I have more control over the volume and tone.

For me, the true test of any change to my routine is its impact on my jazz playing. I can measure that impact pretty easily by looking at my performance in the jazz combo that I play in each week. With the combo, there's always a point in the night where my chops become fatigued and I resort to excessive pressure in order to keep playing. I'm still reaching that point during the sessions, but it's occurring later in the night. Actually, last week it didn't even happen at all. Granted, that session was a little shorter than normal, but for the first time ever, my embouchure didn't give me the silent treatment on the way home!

Man. I am glad you're back. Have been checking in often and missing the updates. Keep posting great stuff

^^ What Jim said - Your site is great, please keep up the good work.

I love the interval training tools on the site and on the android app store - they are an invaluable resource!

Thanks for the support, guys. It's good to be writing again!

Ha! I remember playing a restaurant gig where there was so little room that my spit valve was literally hovering over people's plates. He he he... We had to play very softly and I think that did a lot to help me as a player. When you strive to be just as musical playing at ppp as you would at normal volumes, it teaches you a lot about how to make music.

Congrats on the travel thing. My wife and I are also striving for this. We both work at home (all of the non-performance stuff that is) and our goal is to be able to spend half our time here in the USA and the other half in South Africa (where she's from). WE are not there yet, but I have confidence that we are on the way.

So thanks for setting such a wonderful example for us to follow!