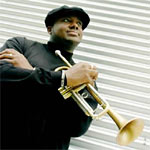 Like the Nicholas Payton concert (w/ GSU) a few days ago, Sean Jones joined the band during the latter half of the evening's concert. The opening numbers included several popular tunes such as "Green Dolphin Street", "I've Got You Under My Skin", and "April In Paris".

For me, the standout from the first half was "Watermelon Man", by Herbie Hancock. The director, Melvin Jones, mentioned that they were going to be doing a special funky rendition of the tune. As soon as I saw the band put their horns down and lean into their microphones I knew what was coming; they performed the Head Hunters version, including an a-cappella version of the intro! It was a great performance and the audience really got into it. The entire tune was played with just four saxophones (or maybe it was five) a trumpet and the rhythm section.

During the "Watermelon Man" performance, the trombone players (who weren't playing) took off their jackets and started passing them back and forth to each other. The saxophone players did the same thing in a later tune. I'm guessing there is some history to this. Perhaps a famous big band used to do this? Or maybe it's a Morehouse tradition? If anyone knows, please fill me in.

Sean Jones joined the band for "Stolen Moments." Before the performance, the band director mentioned how he and Sean attended Rutgers together. He also announced that Sean had recently accepted the lead trumpet position with the Lincoln Center Jazz Orchestra (apparently Sean turned them down twice before). I had known about Sean joining that band, but I didn't realize he was going to be playing lead. I didn't even know he could play lead. That gap in my knowledge has now been filled. He most definitely CAN play lead!

Sean is a wonderful player and he really knows how to work a crowd. His "Stolen Moments" solo began with a few choruses of laid-back low notes. His tone was very airy, and he lazily played short simple phrases. It went on for so long that I'm sure the audience started to wonder what he was all about. Even I started thinking, "this guy is the new lead player for the LCJO? Did Wynton make a mistake?" But, this was all part of the show. When Sean finally did turn it on, when he showed us what he could do... damn. It was like Godzilla tearing through Tokyo -- unstoppable. Just when I thought he had reached his limits, when I thought he had given it all he had, he kept on going. When he finally did reach his peak, he belted out the most incredible Freddie Hubbard slur/shake lick (the lick Freddie plays in several solos, particularly "Red Clay". Freddie, of course, plays on the original recording of "Stolen Moments" so this was a nice nod). It was so good, you would have thought Freddie himself had just walked on the stage. The crowd loved it, cheering Jones along. Even the trumpet players were jumping up and down, pumping their fists in the air. It was the most fun I've ever had listening to jazz. My eyes even began to tear up a little from the pure exuberance.

On subsequent tunes, Jones proved that he can not only play high and fast, but that he also knows how to put together a musical solo. He also further demonstrated his ability to entertain a crowd (although this was thoroughly proved during "Stolen Moments"!). There were a few times where he'd attempt a seemingly impossible note. He'd miss it a couple times then take a quick break and nail it with ferocity. I'm sure this was intentional, but the audience ate it up. Great showmanship. Sean will be a fantastic addition to the Lincoln Center Jazz Orchestra.

The last tune of the evening, "Flying Home" was another highlight for the Morehouse jazz band. The band really got into it, waving their horns and moving up and down in sections. The energy carried over to the crowd, which visibly moved to the beat. It was so enjoyable, I didn't want it to end.

Since I just heard the Georgia State University jazz band a few nights earlier, I naturally found myself making comparisons. For the most part, it would appear that the individual players in the GSU band are more proficient on their instruments. As a group, they are more precise, nailing each entrance and passage. They manage to keep up this high level of playing while performing noticeably more challenging tunes/arrangements.

I still think GSU is a great band, but compared to Morehouse, they sound a bit robotic, as if GSU's main objective is simply to play each tune as precisely as possible. Morehouse, on the other hand, performs as though their main objective is to entertain the crowd and to have fun while doing it. And it works. By the end of the evening, I felt like I had just been to a party. I wish I felt that way after every college big band concert…

I should have posted this sooner...

After the Sean Jones concert, I wrote an email to Melvin Jones, the director of Morehouse's jazz band, to thank him for putting together such a great concert.

The following is what Melvin told me about the band:

"The band is actually more of a volunteer based organization on campus. Most of the members are non-music majors who just love the music (hence the different levels of musical proficiency). I try to use that love to select the types of tunes that they will enjoy performing. I also believe in any that approach helps the band concentrate more on the "feel" of the music rather than what's written on the paper. Music should always be about interpretation for performers first, then accuracy is determined by the musician's own tastes and preferences (my own opinion)."

I also learned that Melvin has only been working with the band for one year. He's off to a great start!

To Rick and other readers,

"My eyes even began to tear up a little from the pure exuberance."

haha! I know what you mean. I went and saw James Morrison in concert a few months ago. I remember thinking that i was about to hyper-ventilte when he finally walked out from the back of the auditorium playing Caravan, and soloed his way up on stage..

It was unbelieveable. I had seen videos of him playing but it was as though i expected them to be flukes. They definatly weren't.

If you ever have the chance to see him play DO IT! Even if your not big on "modern jazz" its definatley worth it, as he manages to pull of a great comedy routine as well! :-) I think he finished the night on the second F *above* the ledger! (after two hours... WOAH!)

Anyway, thats all i wanted to say.

I love Morehouse Jazz Band. They are the greatest.

GSU vs Morehouse...the music is totally different. When I first heard GSU Jazz band, I was totally surprised; they sounded just like a middle school. I could not believe it. But Morehouse is unbelievable and I love their sound. They are the greatest and Melvin Jones is a great band director.

FYI. I am a student at GSU, but love Morehouse Jazz Band.