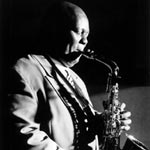 Wessell "Warmdaddy" Anderson was in town recently, as the featured performer during at the Emory University jazz festival. Most of my trumpet-playing readers will know Wess from his association with Wynton Marsalis. Wess is the lead alto saxophonist in the Lincoln Center Jazz Orchestra and he's a regular member of the Wynton Marsalis Septet. Most recently, he appeared on Wynton's Live At The House Of Tribes recording. In addition to his playing gigs, Wess is also a professor of saxophone for jazz studies at Julliard School of Music. Not too shabby, eh?

While in town, Wess hosted two masterclasses and he performed with the Gary Motley Trio (Gary Motley on piano, Paul Keller on bass, Pete Siers on drums). Between the masterclass (I could only attend one of them) and the main performance, I got to hear Wess play for about three hours. As anyone who's heard him play knows, Wess is a monster player. He's so good, it's down-right scary. Whether playing a ballad or an up-tempo burner, Wess appears totally relaxed and absolutely confident. The music just pours out of him.

The masterclass I attended took place during what would have normally been Emory's jazz improvisation class. I'd guess that there were about 30 people in the audience, with about half being students.

Wess and the Gary Motley trio performed one tune after which they discussed some of the things that happened during the performance. Most notably, they talked about the interaction that occurs between players, touching on many of the same elements that I mention in the "GROUP INTERACTION" portion of my LISTENING TO JAZZ guide.

After the discussion, six students (4 sax, 2 piano) joined the band for a brief jam session. A student sitting closest to the front started to reach for his fake book when Wess stopped him cold. As Wess put it, the fake book is for working, but they weren't getting up to work; they were getting up to play.

Wess went on to explain how books are like crutches. They prevent us from developing our ears. While learning to play, he didn't rely on books. Instead, Wess used his ears to figure things out. I've heard similar comments by other great players, including Nicholas Payton. They all learned tunes just by listening. When you think about it, using a book to learn a tune (especially a tune's melody) is cheating your ears out of good ear training practice. Stop, thief!

The group ended up jamming to "Straight No Chaser", a tune that the students had been working on in their jazz improvisation class. All of the students knew the tune well and played decent solos. One student in particular played with great ease, playing fast lines confidently and effortlessly. At first it was impressive, but he kept going and going and going. I'd guess that he took a dozen choruses or more. He and a couple others soloed for so long that one student, the lone trumpet player in the crowd, didn't get a chance to play.

JAZZ IS A CONVERSATION

After the jam session ended, Wess and the other guys gave some feedback to the students. One of the first things they mentioned was the fact that several of the students didn't interact enough (or at all) with the rhythm section. Those students got up there, played stuff that they normally play, and that was it. Wess and the rhythm section reiterated some of the concepts they mentioned earlier, stressing how the group needs to communicate as though they are having a conversation. Everyone listens to each other, everyone contributes, and the final product is a result of everyone's input.

Another criticism was that some of the players didn't use enough space in their solos. Had they left more space between ideas, they would have given the rhythm section a better opportunity to react to what they were playing. Once again, the conversational aspect of jazz resurfaced. In a conversation, you say something, pause, listen to input, respond to the input, pause, and so on. Those pauses are the spaces that we need to put in our jazz conversations.

In addition to using more space, Wess suggested that some of the students could benefit from using fewer notes in their solos. While it might seem exciting to tear through note after note, after a while it can become tiresome to your audience. Instead, using fewer notes with more rhythmic variations can create much more excitement in a solo. Wess then asked the drummer to play an eighth-note rhythm on the ride cymbal, while he played a one-note solo on the saxophone. While I'm a huge advocate of one-note solos and note limiting, I've never heard anyone else talk about it, especially not any jazz educators. So, it was great to hear Wess talk about it, demonstrate it, and also go on to mention how guys like Lester Young and Ben Webster used to light up the room with just one note.

The last bit of criticism pertained to the length of people's solos. Without actually pointing at the guy, Wess made it quite clear that the strong player had taken too many choruses. In a jam session setting, you need to be kind to the other players waiting to play. Two or three choruses is generally long enough, especially when you have five or more people waiting to play after you. The other comment about length was that you have to know when to stop. A couple of the students played five or six choruses, yet they ran out of ideas half way through their solos. To continue the conversation theme, if you have nothing to say, you're rambling. It's best to just stop talking.

The bass player, Paul Keller, had a good tip about transcription that's definitely worth passing on. Rather than transcribing an entire solo, just pick eight bars or so that you really love. Transcribe those eight bars, study them, practice them, and those ideas will stay with you a lot longer than if you transcribe the entire tune. Makes perfect sense to me.

I've attended various combo and big band concerts at Emory University over the past three years. Emory's jazz program is relatively new, but each year I've seen noticeable improvement in both the number of students and in their playing. I was especially proud of one of the saxophonists at the jam session. I heard him play last year and the improvement he's made since then is astounding.

It will likely take several more years before the jazz studies program at Emory reaches the size and strength of established programs (like that of Georgia State University), but it's been very encouraging to see that it's well on its way. Congratulations to all the students and to Gary Motley. I'm sure you've all put in a lot of hard work, and it shows!

Wonderful post man. I love the suggestion about grabbing 8 bars of a solo that you love and work it to death. Sounds like I'll be doing that this weekend.

Really love your site, your generosity, and your posts. Your ear training program in particular is a immensely helpful jazz/music practice aid. I'm very grateful for your willingness to provide it free of charge on internet. Peace