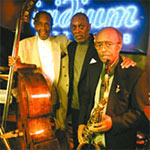 Percy Heath passed away on April 28, 2005, at the age of 81. Nearly one year before his passing, I was fortunate enough to attend a master class with all three of the Heath Brothers. My original journal entry from that class is shown below.

The 2005 Atlanta Jazz Festival is this weekend. There are quite a few great artists in town, including the Heath brothers, who gave a masterclass on Sunday afternoon. The class lasted about 2 and a half hours and it was truly one of the greatest experiences of my life.

To start, the Heath brothers are living legends. Check out the links below to get bios and discographies for each of them. As you can see, they've played with virtually EVERY jazz legend. During the class they played about 7 tunes and told at least twice as many stories about their experiences as jazz musicians. There's so much to tell, so I guess I'll just jump right in with descriptions of the brothers.

The most famous of the brothers, Jimmy is still an incredible tenor sax player. He's now 77, and rather small in stature, but when he plays… look out! I don't think I've ever witnessed anyone play so well and so effortlessly. He is a true master of jazz. Many years ago, Albert (Tootie) gave him the nickname "The Professor," which suited him well. Later in life, Jimmy became a professor at Queens College in New York. The scholarly run continued, as he would go on to receive three honorary doctorates (the 3rd is to be granted in a few months), including the first honorary doctorate granted to a jazz musician from Julliard.

The oldest of the brothers, Percy, is 81! Percy rotated between playing a full upright bass, to playing his "baby bass," which looks like a cello. He's a very jovial man. After talking about Elvin Jones' recent passing (Jimmy spoke at the wake), Percy jokingly commented that when he finally passes, we could cry if we want to, but there's no need… since he lived such a great and happy life. Even if you haven't actually heard of Percy, you've most likely heard him play. He's on a couple hundred recordings, with artists like: Clifford Brown, Charlie Parker, Dizzy Gillespie, Dexter Gordon, Miles Davis, John Coltrane, Sonny Rollins, Cannonball Adderly, Art Blakey, Thelonious Monk, Don Cherry, Bill Evans, Stan Getz, Art Farmer, Milt Jackson, and Horace Silver… to name a few.

Albert is the youngest brother, at 69. Often overshadowed by the likes of Art Blakey and Elvin Jones, Tootie's list of recordings clearly shows his role as a top drummer in the hard bop era. Like his brother Percy, Albert has recorded with an amazing number of jazz legends.

Now that you know a little about the brothers, I'll try to retell some the great stories they told…

JAZZ AND THE PIANO

Dizzy Gillespie happened to be at Jimmy's house one night, during the period where Jimmy was making the transition from swing to bebop playing. The brothers had an old upright piano in their house, but they didn't really know how to play anything. Dizzy went over to the piano and showed Jimmy some bebop voicings and progressions. The message was: if you want to learn jazz, you need to learn the piano. Jimmy clarified this a bit, saying it isn't necessary to be a great piano player; you don't need to be able to improvise on the piano or anything like that. But, you'll benefit greatly if you can play the chords for each tune you want to learn. Jimmy credits this early lesson from Dizzy as integral to his growth as a composer (since the piano allows him to play all voicings simultaneously).

THE (UN)IMPORTANCE OF JAZZ THEORY

While Jimmy Heath has a strong knowledge of jazz theory, his brother Percy admits to knowing "none of that." I was really surprised to hear this, as I typically think of bass players as masters of all the complex jazz rules. Percy told us an anecdote that pokes fun at the unnecessary complexity that critics and academics impose (sometimes) upon the jazz artform:

Percy was recording "Blue Haze" with Miles Davis. Miles told him to walk on the intro. The resulting bass line was later transcribed and analyzed in a DownBeat article. Percy laughed about the article, mentioning a part where the author said that Percy used a tritone substitution over a II-V-I, to which Percy burst into laughter as he said "I did?!?" The point was that Percy and many early jazz pioneers had little technical understanding of what it was that they were doing, which makes sense when you think about it. After all, the technical analysis of jazz exists simply to explain things that have already been played. Theory has its place, but I think people get way too caught up in it all. I've seen many posts on the TrumpetHerald's jazz forum where people ask what scales/notes they should play over a particular diminished or altered change. Those posts are typically followed by lots of complicated scale theory. But really, it can get kind of silly. Just play whatever sounds good to you… It worked for guys like Percy!

When asked by an audience member about the future of jazz, Jimmy quickly brought up Wynton Marsalis' name. Jimmy applauded Wynton's efforts with the Lincoln Center Jazz Orchestra, which tours all over the world to expose people to jazz music. Jimmy also mentioned the Duke Ellington competition that Wynton started to get high school bands playing Ellington's music. Lastly, he mentioned the upcoming opening of the Columbus Circle jazz facility, the first structure of its kind. It was clear that all of the Heath Brothers support what Wynton is doing. Whether you like Wynton's style or not; whether you agree with his views or not; one thing is clear: he is the most public figure in jazz and he has the greatest ability to ensure its longevity. He needs all of our support.

I don't listen to a lot of vocal jazz. I've got a modest collection of Ella, Billie, Nina, and Sarah recordings, but that's about it. So, when Deborah Brown got up to sing with the Heath Brothers after a brief jam session (no, I didn't bring my horn this time), I had no idea what to expect. It was an impromptu performance and it was absolutely amazing. She did a rendition of "The Nearness Of You" that was exquisite. That's the only way I can describe it. I was in tears by the end…

I'D RATHER (NOT) BE FISHING

After several tunes and after many wonderful stories, the Heath Brothers said their goodbyes to the crowd. Percy summed it all up when he said it's the love of playing music with his brothers that keeps him on the road at 81 years of age. In a final statement he said, "if it wasn't for them, I'd be fishing right now." A huge smile came over Jimmy's face as the crowd stood up in applause. You could faintly hear him say, "it's true, it's true…"

I'm still overwhelmed by the reality of what happened today. I can't believe I was fortunate enough to spend the afternoon with such legendary jazz artists. They are connected to a past that I feel incredibly passionate about, yet a past which I'll never really know. As great as today was, it saddens me to think that I may never have an experience like this again...