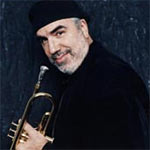 Today I attended a free master class hosted by Randy Brecker, who happens to be in town for a concert with Orchestra Atlanta.

Randy discussed a wide range of topics, covering everything from his warm-up routine, to what it felt like to quit Blood Sweat & Tears after they recorded their first album… right BEFORE they'd achieve phenomenal success!

For those interested, here are some notes from the class:

Randy varies his daily warm-up, switching between the Caruso 6-notes and a Bill Adam-inspired version, where he uses spreading intervals (starting on G or E -- at the bottom of the staff) instead of the standard 6 notes. Randy played quite a bit of both variations for us, as he hadn't yet warmed up for the day.

I've been curious about the Caruso method for some time, but I've never seen or heard anyone do it. So, it was great to get a brief demonstration from somebody who learned it directly from the master --Randy studied with Caruso after moving to New York.

After the calisthenics portion of his warm-up, Randy does a variety of exercises including Schlossberg slurs, Clarke studies, and descending and ascending slurs. After that, he'll throw in Charlier or Top Tones etudes. I've never heard of Top Tones, but after hearing him play a couple examples, I think I'll check them out. Randy also mentioned a recent book called "Flexus," by Laurie Frink and John McNeil, which he's been incorporating into his daily routine.

Randy stressed the importance of taking a break when he feels fatigued or sore. I guess this is something most of have learned (the hard way) by now, but it's probably worth mentioning anyway.

It's only been a few of months since I wrote my fast articulation journal entry. In that post, I wondered how the great players manage to articulate each note in fast passages. Well, Randy confirmed one theory: doodle tonguing. Randy began doodle tonguing early in his trumpet playing career and has been doing it ever since. He gave a few examples of slow and fast doodle tonguing and recommended a book called "Forward Motion," by Hal Galper for more exercises.

Most jazzers wouldn't come right out and admit that they practice licks, but Randy had no qualms about doing just that. He openly admitted to transcribing solos of other players and picking out bits that he really likes. He then practices the licks until they become a part of his repertoire. Surprisingly, he also does this with his own playing. That's right, he transcribes Randy Brecker solos to learn his own licks!

I brought my horn to the clinic, thinking that this would be my first time playing in public since the comeback. Towards the end of the clinic Randy asked people to join him for a brief jam session. I'm embarrassed to report that nerves got the best of me, and I chickened out on the first two tunes. I kept telling myself that I'd get up there on the next tune, but after two tunes the jam session ended. I wasn't alone in my cowardice, though, as there were 10-15 people who brought their instruments and only three were brave enough to sit in (besides the rhythm section).

I have to admit that I wasn't much of Randy Brecker fan before today. I've always known he's a phenomenal player, but a lot of his recordings don't do anything for me (3/24/05 update: to be fair, until this date I was mostly familiar with his R&B/Pop-sounding recordings. I've since listened to more of his great hard-bop-style recordings with Horace Silver and others). So, it wasn't personal, but rather a dislike of (some of) his musical tastes --perhaps that is personal. Anyway, after learning more about him and the hard work he puts into his music, I have a newfound appreciation for the man. He's also a really unassuming and friendly guy. If he ever hosts a master class in your town, be sure to check it out.

I'd also like to add how humbling it is to be in the same room with such a gifted trumpet player and musician. The reality set in real quick: I'd be fortunate if I could someday play just half of what he can play...

First off -- thanks for sharing with everyone your experience at the clinic. It is really cool to hear that he does the Caruso 6 notes. I warm up with it every day. I also work on the Bill Adam routine.

Second -- I've heard your clips and there is no way you should be chicken about stepping up and playing with others. I listen to your playing on "Granted" and I hear a player who knows what he is doing. Next time you get the opportunity - just stand up and join in. You may be nervous coming out the gate but you will settle down and get into the music before you know it. You love it too much not to.

You sound great and don't let anyone (including yourself) tell you otherwise. I say this as a player and a constant listener of jazz.

My standard "am I ready to play in public" insecurity was made worse that day due to the fact that I don't have many tunes committed to memory. In this jam session, the horns were expected to play the head and nobody was using fake books. So, not only might I have played poorly, but I also could have exposed the fact that I don't know some tunes that I *should* know...

Back in my college days, I had a list of about 100 tunes that I could play at a "moment's notice" --yep that was one of them ;-). Since starting to play again, my chops have been so weak that either I can't play the melody due to range, or if I can play it, my chops will become too fatigued to improvise. Consequently, I have only a few tunes that I still remember from start to finish.

This experience has showed me that I simply MUST start learning tunes again if I have any hope of playing out. I guess I can simply take the melodies down an octave to play in a more comfortable range...

As always, thanks for encouragement and kind words.

Let me ask you this question and perhaps some of the other site visitors will chim in with their thoughts...

Do you ever get overwhelmed thinking about all the stuff that must be mastered in ordered to play jazz well? First you must have control over your instrument (technical ability, tone, articulation, endurance) and then you must learn scales, chords, tunes, etc... So many things!!

Lately (probably because I've been sick) I've been thinking about everything I must work on and there are definitely moments when I wonder if I'm fooling myself by thinking I can actually do this with some measure of success.

The instrument part of the equation definitely becomes easier over time, unless you have embouchure problems (HA!). Even with some problems, you'll likely reach a point where you go into 'maintenance mode'. That is, you'll play the necessary exercises to keep your chops at a certain level of performance.

The chord/scale stuff may seem challenging, but really it doesn't have to be. It's good to remember that the jazz pioneers didn't have all of these complicated theory books. Most of them learned to play by ear, so it was easy to play what sounded good to them. I wouldn't be surprised if some started out their careers only knowing a couple of scales. Yet they still sounded incredible!

Don't get me wrong; you should learn your scales and chords. Try to learn as much as possible. The more you learn, the easier it will become to play a variety of tunes, and the more proficient you'll become over your instrument. But, don't think you need to know it all (or even a lot of it) before you can start to improvise and make music. You only need to know a handful of notes to play a great solo…

Good blog. (I think "Flexus" is Laurie Frink's book, however.)

During the masterclass, Randy only mentioned McNeil. I've since learned, however, that the book was co-authored by both Frink and McNeil. I just updated the original masterclass post to reflect this.

I bought Flexus a week or two after the masterclass and I've been using it ever since, as part of my daily routine. Highly recommended!