UPDATE: The Android application is no longer available. For more information, you may want to read my 12-year anniversary blog entry.

I created my Play By Ear iPhone ear training application in 2010. Ever since then, I've received a steady stream of requests for an Android version of the ear trainer. Well, I'm pleased to announce that as of this morning Play By Ear is available for download in the Android Market. 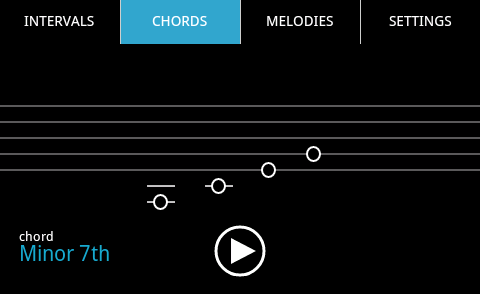 Unlike my previous ear training tools, the Android ear trainer is not available for free. Instead, it's currently for sale at $1.99 (I think we can all agree, $2 would have been a total rip-off). There are a few reasons behind my decision to charge for the Android application but here are the two big ones. First, until a week ago, I didn't own a single Android-compatible device. And the only reason I own an Android device now is so I could do a final round of testing with some confidence that it would actually run on something other than the software emulator. In other words, this is an application written for a device that I don't use. As such, I've viewed it more as a contracting gig. One that, I fear, will not pay very well.

The second big reason for charging for the Android application is that the iPhone version probably won't be free for much longer. While I enjoy building and sharing my ear training tools with everyone, the mobile apps have taken much longer than their online counterparts to write and maintain. It would be nice to receive some payment for all of that work, even if it's just enough to cover the AppStore fees (Apple charges $100/yr).

You'll find a list of the basic features and some tips at the Play By Ear Android page. This is my first attempt at writing an Android application. I've tested it quite a bit, but since I only have one Android device (a used HTC Eris phone), I don't really know how it will run on newer devices and tablets. If you do end up trying the application, please let me know if you run into any problems. And if you enjoy the application, please rate it accordingly. Thanks!

GREAT!!! Now I don't have to bother with powering up my computer to give myself an ear training. Glad to recompense for your effort.

I guess it would come in handy if there's 'replay' button in every exercise mode.

Thanks for all the great Ear training tools

Alot of the cats down at the Hoxton Jam (our local Jam night) are using the online ear trainer !