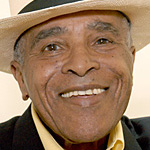 I recently attended a masterclass and concert by legendary vocalist, Jon Hendricks. Both events were part of the 2007 Emory University Jazz Festival.

For those of you unfamiliar with Jon Hendricks, he is one of the best scat singers of all time and he's one of the originators of vocalese. Vocalese is the art of adding lyrics to instrumental tunes and solos. For instance, on the tune Freddie Freeloader (on his album of the same name), Hendricks wrote and sang lyrics to Coltrane's solo from the original recording on Miles Davis' "Kind of Blue" album. Note for note, but now with words! Hendricks has similarly lyricized hundreds of tunes over the years, including several Thelonious Monk recordings and perhaps most famously, entire Count Basie big band recordings with his highly influential group Lambert, Hendricks & Ross. You can visit Jon Hendricks' website for more information about his career and vocalese.

Born in 1921, Jon Hendricks is currently 85 years old, but you'd never know it. His energy, joy, and delightful sense of mischief are rare to find in people half his age! One of the best examples of his playfulness occurred toward the end of his concert, when he sang a bass solo. He held his hands in the air as though he was actually playing a stringed bass, and began to scat sing the low notes and phrases you'd expect to hear in a bass solo. As his solo progressed, he motioned for various members of the rhythm section to stop playing until he was soloing all by himself. With a broad wave of his hand, he'd strum a powerful low note the air, shaking his entire body as the note resonated. Every so often he'd shake so much that he'd look up at his left hand as if to check which note had caused such a ruckus. The audience loved it. Even Hendricks himself was fighting back the laughter. But, it crossed from funny to hilarious when after one of these loud notes he reached up with his left hand and turned the tuning peg of his imaginary bass. Even the rhythm section burst into laughter on that one.

It was wonderfully entertaining to see and hear Jon Hendricks perform. It was also a treat to hear the rhythm section of Gary Motley, Emory University's director of jazz studies, on piano, Paul Keller on bass, and Pete Siers on drums.

You may recall that during last year's Emory Jazz Festival, I attended a masterclass hosted by Wessell Anderson. That masterclass was held during one of Emory's jazz improvisation classes, so the discussion was improvisation-oriented and there was a jam session with comments by the visiting artist. It was one of the best master class I've attended thus far. This year I was hoping to attend that same improvisation masterclass but unfortunately I couldn't break away from work. So, I instead attended a later masterclass that occurred during Emory's jazz appreciation class. Or maybe it was a music history class. In any case, it was more general in focus since the students appeared to be non-music majors.

This is just a long way to say that I don't have a lot to share regarding jazz improvisation, but I do have a couple of points:

When discussing his development as a vocalist, Jon Hendricks said that when he was young he couldn't read music and he couldn’t play an instrument, but he could "hear around the corner" and he could sing. So with great ears and a strong voice, he'd listen to popular recordings and sing the entire recording from start to finish. His ability to learn by listening not only allowed him to replicate what other musicians were doing but it also taught him the elements of good solos, provided him with a vocabulary of ideas (although I'm sure he has plenty of his own), and paved the way for him to become one of the best scat singers of all time. And he did it all by listening.

THE IMPORTANCE OF SINGING

As mentioned, I didn't attend the improvisation masterclass, but during the masterclass that I attended, Gary Motley reiterated something that Jon Hendricks said during the improvisation class. The basic message was: If you can sing it, you can hear it. And, If you can hear it, you can play it. While I didn't get the full context of that point, I can certainly guess its meaning since I've discussed a similar concept in my Learning to Improvise series. The basic idea is that in order to play well as an improvising musician, you need to internalize the melodies, rhythms, and phrasing of jazz. This internalization can be measured and strengthened through singing. Only when you're able to effortlessly sing something will you truly know it well enough to play it on your instrument. Of course, your ability to play by ear will control how well you can do that last part…

got any idea of where i may find the lyrics he wrote for miles davis' Freddie Freeloader?

jazz is the coolest type of music because it doesn't need words to be a good sounding song. also i'm a 13 year old kid that lives in the year 2008. that is saying something.