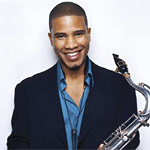 I recently attended the second of two master classes presented by Grammy-nominated tenor saxophonist David Sanchez, at Georgia State University. These master classes are part of David's "artist in residence" at GSU during the 2005-2006 school year.

Prior to the master class, David had a rehearsal with the GSU big band to prepare for their joint concert later that night. Apparently, the rhythm section was having trouble locking-in with each other on one of the tunes, and David was a bit concerned with how things would go for the actual performance.

Since several of the GSU big band students were at the masterclass, David centered the discussion on building a cohesive rhythm section that can carry a jazz group. At the core, David stressed how a rhythm section needs a solid pulse, where everyone is feeling and playing the same rhythmic groove. As he put it, that pulse becomes a point of departure for the rest of the music. If everyone isn't feeling that pulse, you'll likely run into problems.

To help the students lock in on this pulse, David had them play a medium-tempo blues while he soloed. His solo started simply (for him), gradually increasing in complexity. The idea was that playing simple lines would help the rhythm section hear each other, giving them a better opportunity to find that common pulse before things got complex. The concept of keeping things simple to focus on rhythm reminded me of my note-limiting exercises. In essence, David was advocating note-limiting for a group.

After David and the students played, David pointed out some of the problems he heard. The biggest issue was the fact that the drummer was playing a little ahead of the beat while the guitarist was just behind the beat. It's quite common for individual jazz musicians to play on different parts of the beat, so neither player was necessarily doing anything wrong. But, since they were at opposite ends of the beat from each other, they didn't sound as together as they could have. Through a little compromise, they could all play closer to the same part of the beat and sound more cohesive as a rhythm section.

David didn't specifically mention this, but I've heard it many times and think it should be stressed here: a solid rhythmic foundation is perhaps the most important part of jazz and/or a jazz solo. If played confidently and with good rhythm, your audience probably won't notice if you play a wrong note, or even several wrong notes. On the other hand, if the rhythm is just slightly off (whether on an individual or group level), it will instantly be apparent to just about any audience.

Later that night I heard David and the GSU big band play their concert together. I'm happy to report that everything came together wonderfully for their performance.

I wish that my rhythm section could get a workout like that. I am speaking of my high school rhythm section. Half of them wouldn't care enough, unfortunately.

I would have loved to have checked out this master class. David Sanchez is an incredible player, with such a deep level of musicianship. I'm a big fan of his Latin Jazz material, but I know he can get around a swing tune quite well too! Thanks for the outline of the clinic!