The 2007 Atlanta Jazz Festival featured a panel discussion with vibraphonist Bobby Hutcherson (AMG Bio) and trumpeter Charles Tolliver (AMG Bio). Both of these musicians recorded for Blue Note in the 1960's and are widely considered to be the some of the greatest jazz musicians of their time. Following are some notes from the discussion. 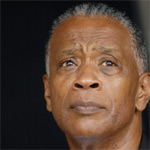 Born in Los Angeles, Bobby Hutcherson started listening to jazz while he was just a toddler. Bobby's older brother attended high school with one of the greatest tenor saxophonists of all time, Dexter Gordon. The two were close friends, and Dexter often came over to the Hutcherson household to hang out and to listen to jazz records with Bobby's older brother while they babysat Bobby. Can you imagine having Dexter Gordon as your babysitter?! Anyway, having these guys around all the time meant that Bobby was listening to jazz for as long as he can remember.

Another influence from the Hutcherson family was Bobby's older sister. She was a singer and she played a lot of music around the house while Bobby was growing up. She also dated saxophonist Eric Dolphy for a while. I wish I had asked Bobby more about Eric Dolphy's role in his musical development, as I really don't know how much Dolphy influenced Bobby at that time. Later on, of course, Bobby Hutcherson would appear on a few of Eric's recordings, including the landmark avant-garde jazz recording "Out To Lunch."

Bobby began playing the vibes in junior high after falling in love with the sound of Milt Jackson on Miles Davis's "Modern Jazz Giants" recording. By that time he had already spent his entire life listening to jazz and absorbing its nuances, so he was able to improve rapidly. Before long, he and his friend Herbie Lewis had formed a band and they began playing at local dances. The two also held frequent jam sessions with other Los Angeles jazz musicians, like pianist Phineas Newborn Jr. and saxophonists Charles Lloyd and Walter Benton. 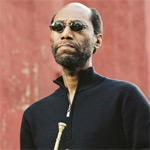 Charles Tolliver was also exposed to jazz at an early age thanks to his parents' jazz collection. Tolliver recalled that by age five he would sit by the record player listening to album after album, learning the sound of jazz. After hearing Charlie Shavers, a swing-era trumpeter, Tolliver became enchanted with the sound of the trumpet and would receive his first cornet by the age of eight. His family moved from Florida to New York soon thereafter and Tolliver continued to play the trumpet and listen to jazz recordings. A recording featuring Clifford Brown and Max Roach really caught his attention, and would become a major influence on Tolliver's early musical development. In later years, Tolliver had the opportunity to play and record with Max Roach and said it was a dream come true.

Listening to Hutcherson and Tolliver describe their early influences and the prevalence of music throughout their childhoods, I couldn't help but reflect on my own childhood. Unfortunately, music did not play a big role in my household while I was growing up. My mother played the piano, but since she also worked full time, she rarely had the time to sit down and play. I recall that my father had a few dozen records, but they were boxed up, or stuck in a closet somewhere. I don't even know what kind of music they were. He also had some 8-track recordings, but I don't remember listening to them all that often. So, it wasn't until I was about nine years old that I got my first (tiny!) boom-box and began to regularly listen to music. I didn't even hear real jazz for the first time until I was 14 or 15.

My wife, on the other hand, grew up listening to music all the time. In fact, it's hard for her to remember times when music wasn't played in her house. Although I can't really prove this, I believe that her early and frequent exposure to music is responsible for the ease at which she can remember lyrics and melodies. It's amazing to me how she can casually listen to a song once or twice and know all of the lyrics, yet I need to hear a song many more times before the lyrics stick in my head (unless I'm really concentrating). Similarly, my wife remembers melodies much better than I do. If I don't consciously attempt to learn a melody and then practice the melody over and over, there's a good chance I'll forget some parts of the melody after a few days. There are several songs in my simple song randomizer, for example, that I've heard hundreds of times yet I can't sing the entire melodies properly because I forgot parts! And the thing is, in most things I have a pretty good memory. My wife would probably admit that my memory is even better than hers in most areas, but for some reason she's significantly better than I am when it comes to remembering music.

If it is the early exposure to music that helps people like Bobby Hutcherson, Charles Tolliver, and my wife, assimilate music at higher level, then that falls pretty well inline with what Suzuki teaches with his talent education method. The idea there is that children can learn new things so quickly and easily that early (musical) influences can produce exceptional talents/skills that stick with us for the rest of our lives.

Bobby Hutcherson told us a story about his sister, during the period of time that she was a "RayLet" with the Ray Charles band. While on tour, the entire band flew around the country in a chartered plane. On one occasion, Hutcherson's sister awoke in the middle of the night and noticed that Ray Charles wasn't among the rest of the passengers. She made her way up to the plane's cockpit to see if the pilot knew where Ray was and whom did she see in the pilot's seat but Ray Charles himself. That's right, Ray was flying the plane! Bobby's sister was so frightened to discover that Ray was flying the plane that she ended up quitting the band to avoid having to fly with him again.

As Bobby told us the story about his sister and Ray Charles, Charles Tolliver burst out laughing. We'd soon discover that Tolliver had a similar experience when he was playing trumpet in Ray Charles' band. One night Tolliver got up and noticed that Ray was sitting in the cockpit, flying the plane, while the real pilot was sitting next to him with his hands away from the controls. Tolliver asked Ray if he could really fly the plane and Ray responded "Well, w-w-what does it look like I'm doing?" And just like Bobby Hutcherson's sister, Charles Tolliver was so worried about Ray flying the plane that he too ended up quitting the band over it!

Charles Tolliver has an underbite, which he believes makes it more challenging to play the trumpet. Specifically, it's harder to produce a good tone because air is more likely to escape through the corners of his mouth, thus weakening his embouchure. He said the same thing is true with an overbite. If your teeth aren't lined up properly, you've got to work extra hard to make things happen on the trumpet.

I was really interested to hear Tolliver's thoughts on these embouchure issues, since I have an overbite myself. Over the years, I've heard from various teachers that an overbite isn't a big deal. They act as though it's no different from having teeth that line up properly. Of course, none of those teachers actually had an overbite or underbite themselves, so they lacked firsthand knowledge. But, I guess they had enough good students over the years with overbites or underbites to convince them that it doesn't matter.

Still, I've always felt that my overbite does make things harder and perhaps those instances of strong players with messed-up teeth are the exceptions to the rule, rather than the standard. It really doesn't matter either way, I guess. I can't do much about my overbite now, but it's nice to hear somebody finally acknowledge that there's a significant difference when it comes to playing the trumpet with an over or under bite.

As great as it was to spend some time listening to Bobby Hutcherson and Charles Tolliver talk, it was even better to hear them play during the 30th annual Atlanta Jazz Festival. If you haven't read my article about the 2007 Atlanta Jazz Festival, I encourage you to check it out.