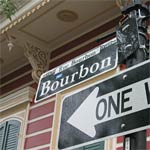 The only time I've ever been to New Orleans was on a high school band trip, when our marching band played during half time at the Sugar Bowl.

We were fortunate enough to spend the better part of a day sight-seeing around the French Quarter. Our chaperoned group did what most tourists (our age) do: We ate some beignets, we took a tram ride out towards the cemeteries, and we visited a lot of quaint little antique and costume shops. I was just a sophomore at the time and I have to admit that the day was sort of boring… that is, until I heard New Orleans jazz for the first time.

Long before I was able to see the band, I could hear the beat of the drums and their trombone player barking out note after note. As we rounded the corner, into the heart of the French Quarter, I was expecting to see the cliché image of old guys in derby hats and pinstriped suits. Instead, I saw a group comprised mostly of kids in normal street clothes.

In the center of the band, the youngest-looking member was less than five feet tall. I'd guess he was eleven or twelve years old. Just moments after I saw him, I realized he was holding a trumpet down by his side. "I wonder if he's any good," I said to one of my friends.

When he put the horn to his lips, out came the most powerful and electrifying solo I'd ever heard. Note after note, everything he played was leaps and bounds beyond anything I could play at the time (or now, even). I was in awe. I continued listening to the band for the next hour or so, leaving only when our chaperone came to get me.

For the rest of that trip and for many months to come, I couldn't stop thinking about that band and the sound of that trumpet. I knew once and for all that I wanted to play jazz.

Thank you New Orleans, for your gift of jazz. I don't know where I'd be without you.

Updated 9/9/05: redhousejazz.blogspot.com has a lot of interesting and helpful posts regarding Katrina, New Orleans, and jazz.

Updated 11/15/05: What We Owe New Orleans discusses the dept that jazz lovers owe to New Orleans.

As a former New Orleanian, I can truly relate to your post. My grandfather played piano in various "speakeasies" around the city in the thirties and forties, and I would like to think that I've got some of his genes. I played trumpet in jr. high and high school, but was "reassigned" to the baritone section, and lost interest. Recently, after some 35-40 years, I decided to purchase a trumpet and see what would happen. I am trying to find the motivation to practice on my own, and maybe your blog and the inspiration of the events in the Crescent City will be the impetus I need to do so.

Funny, I can't seem to get a song out of my head: "Do You Know What It Means To Miss New Orleans?"