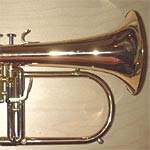 I sent my flugelhorn in for repairs about 6 weeks ago. Well, it's back!

Accompanying the horn was an invoice/packing-slip from Jupiter's Austin, TX plant. The form has a single line item that describes my horn's status as "Repaired and Returned". Other than that, I have no official details about the repair work.

After opening the case, I was pleased to discover that the valves moved freely. I imagine that they probably haven't been oiled for a few days due to packing and shipping, so the fact that they weren't totally stuck was a relief (they used to seize up after sitting for a few days). Next, I checked the serial number. Yep, it's the same horn I sent them.

Upon removing the valve pistons from their casing, I noticed that the pistons didn't look the same as before. They originally had fairly dull-looking silvery appearance; pretty much like every other horn I've seen. Now, however, the pistons have a shine to them. Also, the metal appears somewhat darker. Like polished nickel.

While oiling the valves (I used red pro-oil this time), I was pleased to see that the oil flowed into the casing a bit easier than before. This observation, along with their new appearance leads me to guess that the repair shop reduced the size of the pistons and then re-plated them with a different material. Or maybe they simply replaced the pistons with new ones.

I've played the horn a few times over the past couple of days (it arrived two days ago). The valves definitely seem smoother and speedier than before, and I haven't had problems with sticking. I've been fooled in the past by their short-lived good performance, though, so I'll withhold judgment until I've had the horn for a few weeks.

I think it's worth mentioning that there is a small nick/dent that I don't remember. I can't say with surety that it wasn't there before I sent in the horn, but it's in an extremely visible location; right near where my right-hand thumb rests, which is in my line of site while playing. It's hard NOT to notice. At least it's only an eighth of an inch long. Also, thanks to my Bach, I'm used to overlooking scratches and dents :-)

I couldn't help noticing that you didn't mention using the Pro-Oil 141-A7 oil since you got the flugelhorn back. Does this mean that you don't recommend it? The reason I ask is that I have a flugelhorn made by Tri-Star with a serious valve-sticking problem. I think that most oils are made for monel-type pistons and I'm in the market for an oil that isn't partial to any particular valve material

I only have a small bottle of 141-A7, which I purchased solely to fix my flugelhorn's valve problems. Now that it's back, I'd rather stick with Red Pro-Oil as it is a little cheaper and because I've been using it for several years on my Bach.

I am pleased to report that my flugelhorn's valves continue to move smoothly even though I've only oiled them once over the past couple of weeks.

You might want to refer to the following link for more information on both the Red and 141-A7 oils: