Version 1.04 of my Play By Ear ear training application is now available for free download at the iTunes App Store. This version contains several improvements, including microphone calibration, improved stability, the addition of "D" as a key center, and the ability to reset the score after the app has already started. 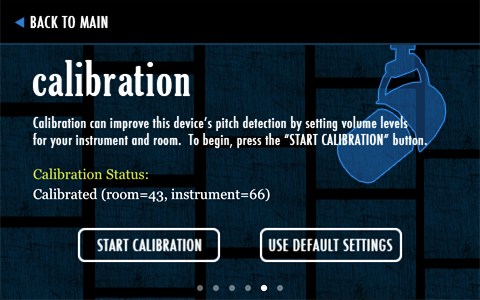 While I'm confident that microphone calibration will improve the pitch detection in the long run, it's still somewhat experimental. After all, I didn't have any clear guidelines to work with, so I just made it all up. For those interested in the process, I take the 20 loudest samples from both the room and instrument. I then throw away the 5 loudest to eliminate spikes. From there, I arrive at your custom microphone threshold with the following formula: customThreshold = roomAverage + ((instrumentAverage - roomAverage) / 2). This formula may change over time, but for now it seems to be pretty good.

If you use Play By Ear regularly, you're familiar with its frequent crashing. You might think it's easy to eliminate crashing from an iPhone application, but sadly it isn't. Some applications crash more than others, but I can honestly say that I've seen most apps crash on my iPhone at one point or another. And that includes Apple's own Mail app, which used to crash all the time on my iPhone. While I might take comfort knowing that Play By Ear isn't the only crashing iPhone app, it still bothers me to know that something I worked so hard on, is so unstable.

For this latest update, I spent weeks trying to find the crash points in Play By Ear. I'm positive that I fixed a few of them, but I still probably didn't find every problem. That's because these specific crashes never occur in the software simulator that Apple provides for development. Instead, the crashes only occur on the actual devices. Unfortunately, it's a lot harder to figure out what went wrong on an unconnected device. I can at least say that after a few days of solid testing on my iPhone 4, iPhone 3GS, iPhone 3G, and iPad... I didn't see a single crash. Having said this, I fully expect several of you to write and tell me that it now crashes more than ever! (facepalm)

This version was released on iTunes last night, around 8pm (EST). According to the iTunes download report, the update was then installed about 250 times within the first 6 hours (update 12/21/2010: over 1,100 in the first 24 hours!). I think it's pretty cool that so many people have continued to use Play By Ear, even in its (formerly?) buggy state.

Oh, and if Play By Ear is working well for you and you enjoy the app, please take a minute to rate the application and/or write a review in the the iTunes App Store. Thanks!

Hey man you think you might ever do an Android version?

I probably will make some type of ear training application for the android, but I can't make any promises yet. For more information you might want to read the end of my 6-month review of Play By Ear: http://www.iwasdoingallright.com/jazz-blog/iphone-play-by-ear-6-month-review/